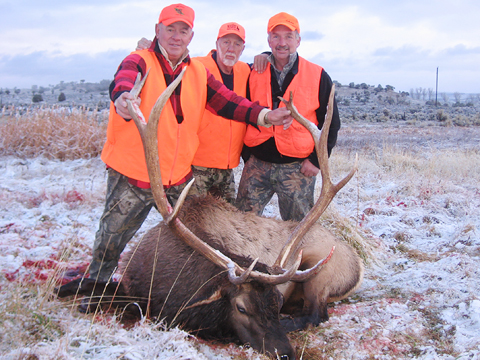 Garvey’s have had another great year and many things to be thankful for. We would like to announce that Dustin Garvey will now be taking over Garvey Brothers Outfitters. This has been his lifelong dream as it has been Stan’s. Stan and I will still be helping but Dustin will be the person in charge. Dustin and his family have now moved to the ranch permanently.

With another hunting season drawing to a close, 2011 proved to be a great success. We had 100% shooting on our elk hunts, killing 12 out of 13 bulls. The average score of the bulls was 311, ranging between 270 and 350. The average score of our Mule Deer continues to rise with each passing year, this year was no exception. After taking 17 Mule Deer their average score was 179. The high score being 210 and the low being 160.

We believe the amount of points it will take to draw in the 2012 season will be as follows:

Happy Hunting,
Dustin Garvey, with special thanks from Stan and Doylene Garvey